Hugo came home with a box of chocolates, two thank you cards (one from the art teacher  – a lovely hand-made one) and a whole book of thank you letters! One from each child in grade 2. Wow! I feel privileged! These are originals! I had such a lovely time going through this book. These teachers are wonderful. They are teaching the children to think creatively, to draw, to write, and to have impeccable manners. (or should that be unpeckable?)

I was going to include just a few, but couldn’t decide between them. They are so wonderfully full of variety and individual style. Here they all are.

Tanner recognises a queen when he sees one. He also draws fabulous computer chairs.

No need for a photo. You can tell exactly what Poppy and Hilda look like from this

Shuta must be a scientist. He added a wonderful life cycle. 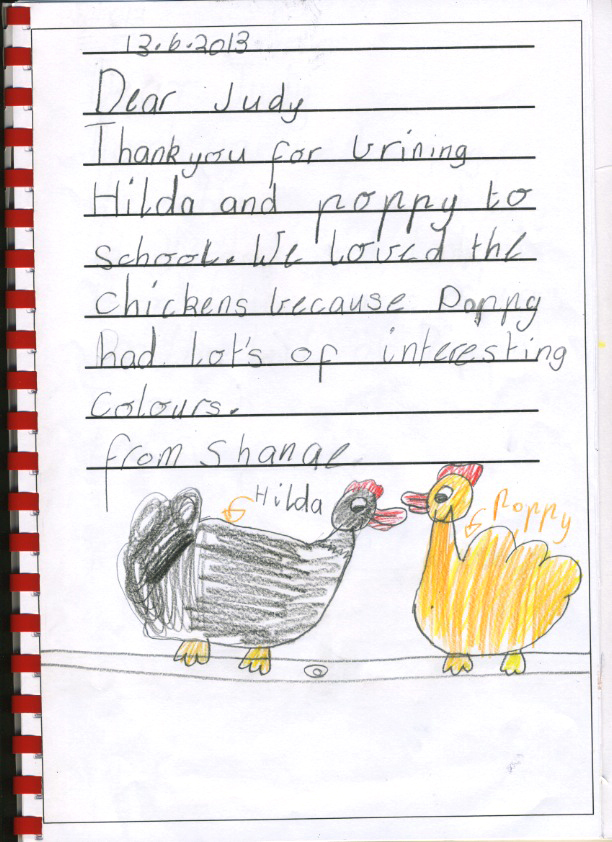 Shanae has drawn the girls chatting amiably together. Wish I knew what they were saying. It looks like it might have been funny.

Shaedyn has put so much work into this. Just look at those interlocking tail feathers and that delicate feathering!

Ryan has noticed a most important thing – the water bowl. He has also done some lovely work with overlaid colour to get the effect of the subtle colouring.

Riya is very interested in animals of all kinds. She obviously worked hard to observe and draw the chickens and their environment and wrote a wonderfully descriptive letter.

This letter is anonymous but very energetic. I get a sense of the whole class surrounding the cage. Something nobody else drew.

Poppy has a magical presence in this drawing! She is filling the whole cage with her majesty. It almost looks as though she is appearing between the curtains of a stage.

Lucas has carefully observed those decorated tail feathers, the shaggy leg feathers and all of the other details of the cage environment.

Leah is a sensitive child like both of my boys. I can tell that she has worked very hard to get this drawing right and perhaps was not happy with it in the end. Leah, it is lovely! Also, this letter is very special as it is the only one addressed to Hilda and Poppy.

Wow! Kai has created a distinctive design with his composition. (It would make a nice postage stamp.) Look at those interesting tail feathers, each ending in an arrow point, rather like a dragon. 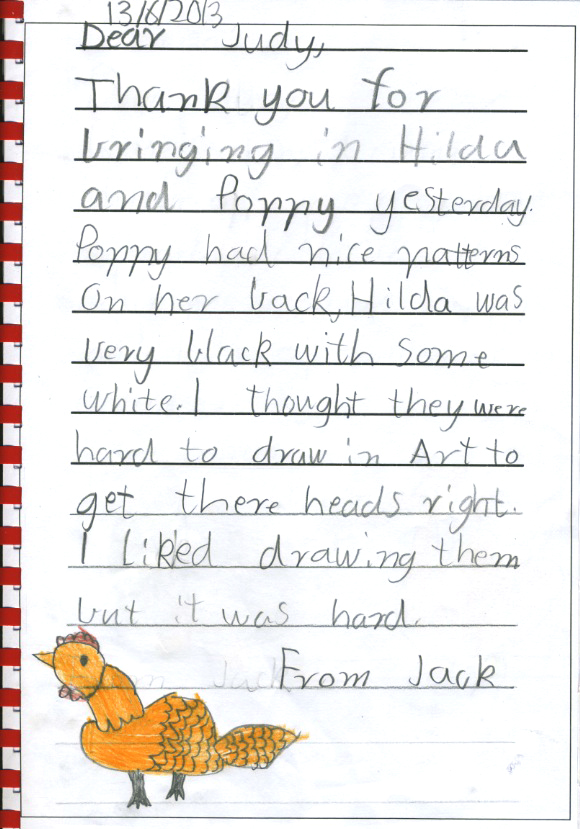 I love the honesty of Jack’s letter and the effort he has put into his work. He has recognised the rounded shapes that make up a Pekin chicken and drawn the overlaid sections of feathering. 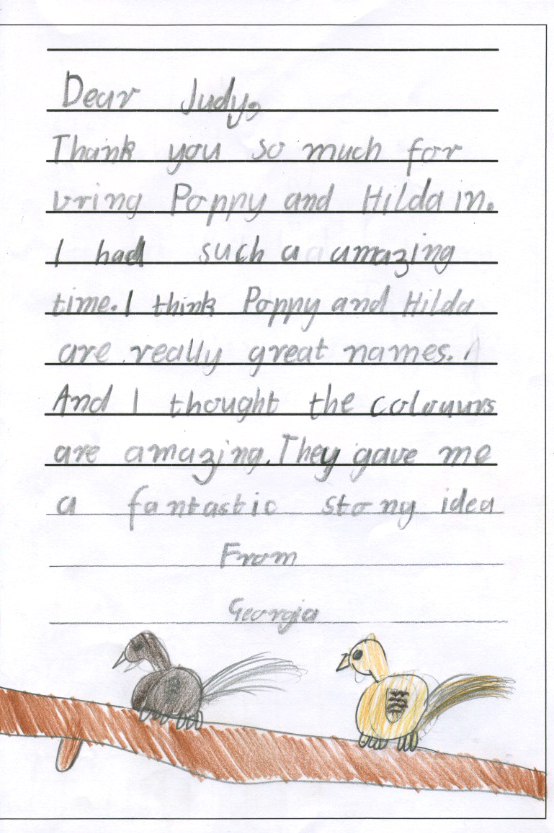 Georgia is so enthusiastic. She has put careful observation and effort into her drawing of the perch as well as the chickens themselves.

Fiona’s gorgeous girls are almost Manga in style. They have tails like flames. They are a celebration!

Elyse has done a wonderfully confident drawing. Her pencil marks are assured and strong, her shapes lovely.

Ella’s chicken characters are so Hilda and Poppy, they make me smile. Hilda is industriously tidying the straw, and Poppy is sitting above and thinking Poppy thoughts… somewhat akin to Woody Allen thoughts, I suspect. ‘This perch feels like it’s about to break… Hilda will blame me… she always blames me…I think I’m going to lay an egg… everybody is looking at me. How embarrassing…’

Eliza wins the prize for drawing most accurately those delicate partridge patterned feathers on Poppy. She has also captured that special alertness that chickens have with their bright and beady eyes. 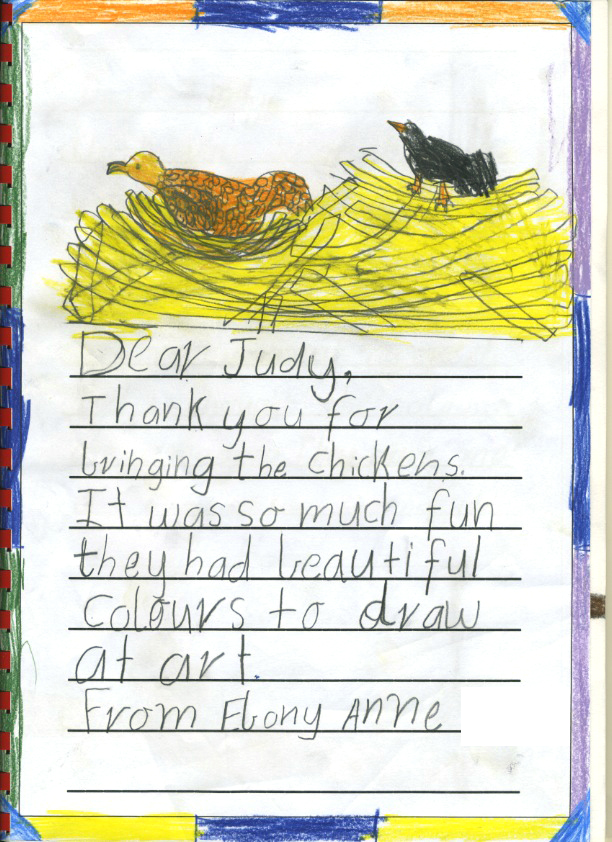 Wow! This is a drawing but also an illustration that tells a story. Poppy has been busy building a nest to sit in, and Hilda is standing on guard at the top of the pile of straw. Ebony has even given her letter a decorative border.

Dylan is a keen sportsman. I’m not surprised that he has taken care to draw those running legs. The chickens look as though they are ready to get out of the cage and do a bit of running around in the sun. 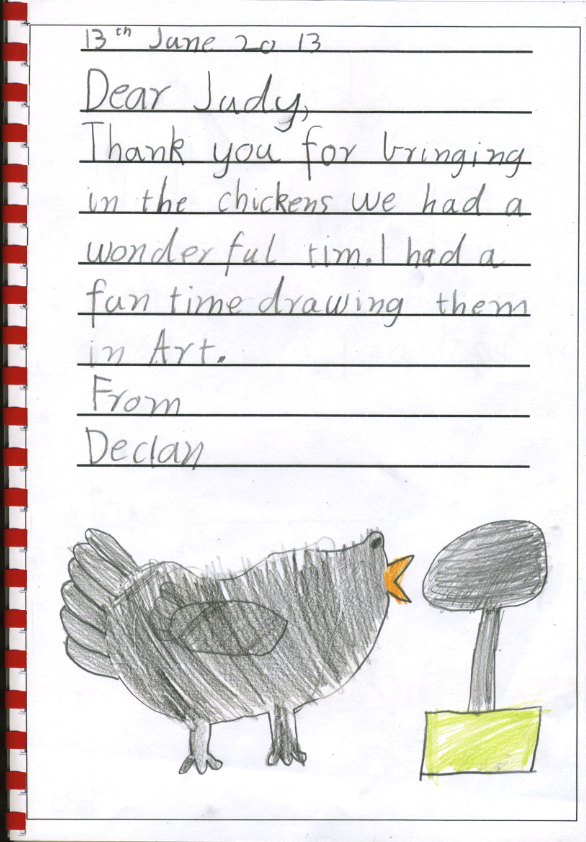 Declan has wonderfully drawn the rounded shape of a Pekin. It’s mostly fluff. (They look funny when they’re wet) And he’s also carefully drawn the drinker.

Daniel has done some great work with his free lines and even given some great background patterning, suggestive of straw. Daniel and Declan both came up to me in the corridor with shining eyes to tell me about their day with the chickens.

This Daniel has chickens at home. I wonder if this familiarity accounts for the confidence of his drawing? He has done a very large, bold rendering.

Dakota is a great character. I’m not surprised she recognised another (smaller) character in Hilda :-)

Charlotte has worked so hard on this drawing and expressed the honey gold glory of the straw like a flame.

Bryce liked the way the chickens moved around. I wonder what he would have done with an animation :-)

Bianca has created her own individual characters here. They are sparkling with personality.

Amy has done a sensitive rendering with wonderful, delicate use of black on black, with a hint of warmth in the wings.

Aahliah obviously loved the chicken visit so much. They will have to come again :-) Notice the ghost chickens in the background, peeping forwards at the viewer. Aahliah must have decided that the profile view was irresistible, with opportunities for drawing feather patterning.