Two of our chickens spent the day at school yesterday. Poppy because she is so pretty, and Hilda the Hun because she is the undisputed Queen of Chickens and very relaxed.

They modelled for some creative writing in the Grade 2 classroom. Then they moved to the art room where they posed for life drawings with two Grade 2 classes and two Prep classes. Everybody, chickens and children alike, behaved beautifully.  The art teacher was wonderful.

I had the pleasure of peeking in (at the Pekins;-) near the end of the day while the preps were still hard at work drawing. They were so proud of their beautiful work. I only had time to take a few quick photos with my phone (mostly pretty dark and blurry!) and to tell them how well they were drawing. Here are just a few that I saw, including a handful by Dimitra who deserves her own separate art gallery. 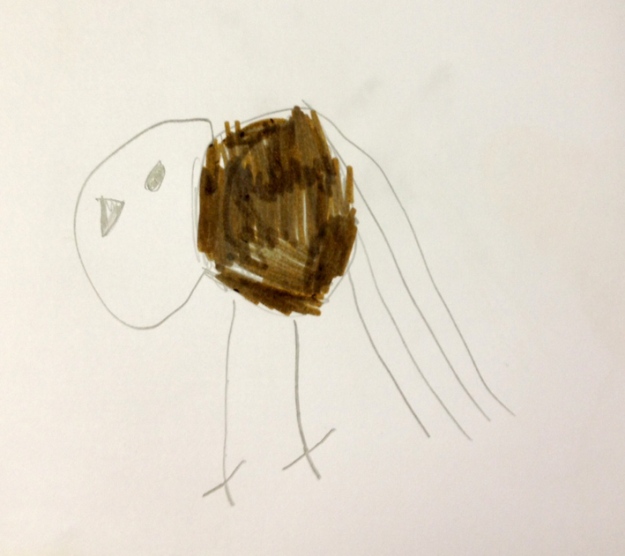 Hilda with a very elegant tail

Definitely Poppy – both the expression and the feathering

Chloe has put a lot of work into that decorative plumage

Antonio has drawn both chickens. Poppy is sensibly keeping out of the way on the perch.

A whole flock of Poppies in progress

Poppy and Hilda side by side on the perch. Feathers fluffed as they preen themselves. This little boy has cleverly drawn Hilda’s head reaching back over her shoulder to preen.

I’m curious about this one. Is this chicken using one wing to bring food to her mouth, or is there a hint of the second chicken behind. I am tending to think the former.

Wish I could get my hands on those eggs. Our girls started moulting and stopped laying a good while ago.