I have given the medium for Leonard Doesn’t Dance a lot of thought over the last few months. I knew that I wanted the style to be very different from Thunderstorm Dancing, quicker, looser, lighter in touch and for some reason sherberty… Ahem. Don’t ask me why.

And during my time in Italy, I was immersed in so much illustration at the Bologna Children’s Book Fair that it was the perfect time to consider what I did and didn’t want to do, and what was already done too many times elsewhere.

Ann James and I talked about illustration styles, strengths and weaknesses too. She told me that the key to good illustration is authenticity. When she looks at a folio of work, if the expression of line or character feels genuine, as though it really comes from the illustrator’s inner self, then technical weaknesses don’t matter so much. You can see the kernel of the artist in the work and it’s good. I’m re-phrasing of course, because I can’t remember the exact words that either of us used. But this is the gist of it.

So where does that leave me as a wandering artist, prone to changes of style? What is my kernel?

I came to the conclusion that I am very comfortable with my pencil, and my line is probably most expressive of my style or styles. Most me. I had decided that I would use pencil or fine liner (for the lightness of touch), white backgrounds on most pages, and colour the drawings swiftly and joyously in bright, (sherberty) digital colour.

Here are some old artworks for the sake of discussion of medium. None of them were drawn for Leonard Doesn’t Dance. 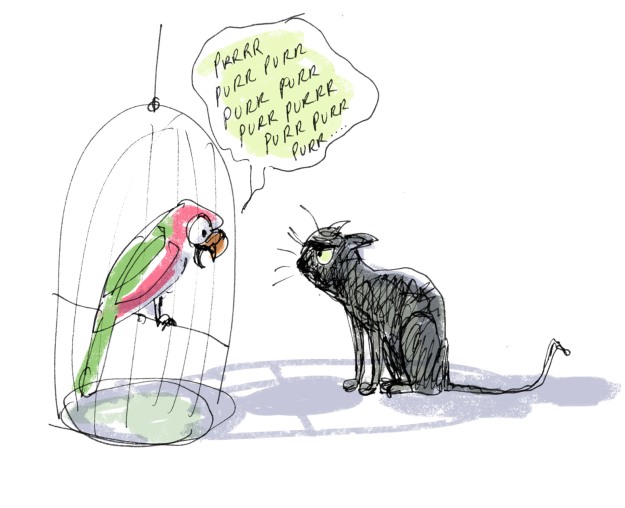 Perhaps this parrot cartoon isn’t a perfect example of what I had in mind, but it’s me, and it has the fine line that I want, the simple, swift colour and the white background. And it’s playful. Playfulness is key to this book.

This continuous line drawing is a little heavier in line (a thicker fine liner) and heavier in tone too, on the cream background of a vintage book which was the very thing that inspired the work for Thunderstorm Dancing. But even so, it is me at my most comfortable with a wandering line… making it up as I go along.

So there I was. All decided.

Then the discussion of clothes came up with the Frances Watts and the publishing team.

Do these birds wear any clothes? Should Leonard be wearing those breeches? Or should he not?

During the course of this (somewhat cheeky) discussion I whizzed through some ‘Trouserbirds’ as evidence of the way my bird drawings had been going in recent times. Most of them were wearing trousers. The examples I sent were from my series of blob birds; all painted by starting with a pale grey washy blob, and then transforming it into wacky creatures with watercolour. 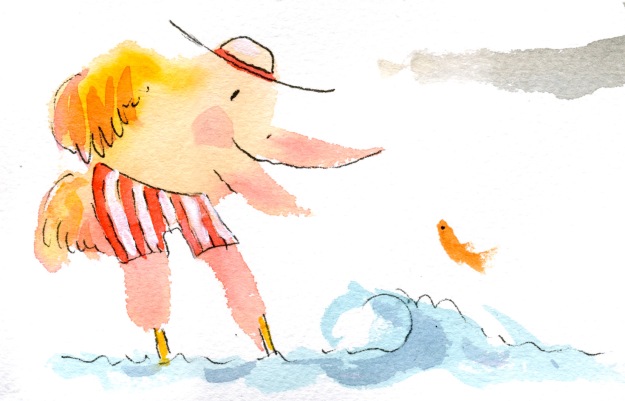 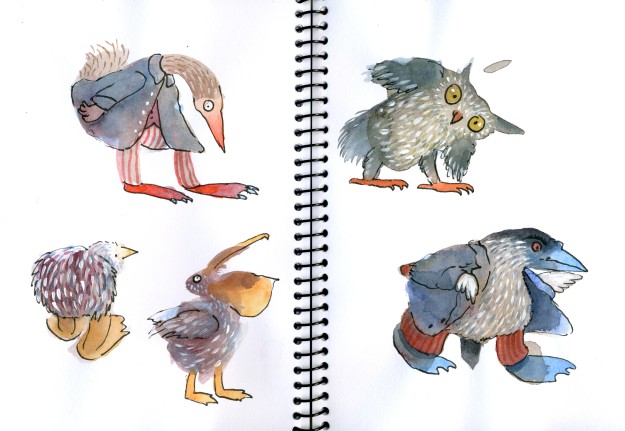 fine liner, watercolour, trousers… why not? (These blob experiments from last year are darker in tone, but that is mostly about the shade of grey used in the original blob. Partly too about their wintery clothes which seemed to ask for deeper, more tweedy tones.)

Frances Watts was taken with the watercolour. Which gave pause for thought. Because I really enjoyed making these blobs and was already planning a book for them of my own. But there’s no reason why they couldn’t launch with Leonard…