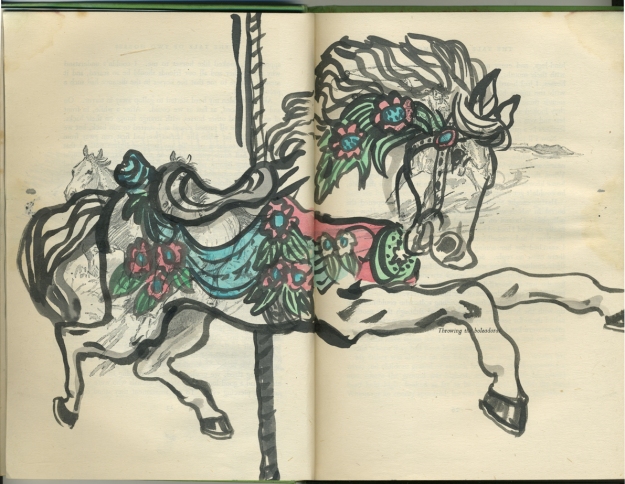 • Should I add any colour? I think I like it plain black….

• Funny how the illustration of the galloping mustangs has made a shadow under the back leg where one would want a shadow, and put an interesting pattern over the carousel horse’s head.

• Should I add white gouache to the horse? If I do, I’ll lose the background mustangs and the flat, outline effect which interests me, but I’ll gain a milky, layered quality and a more three dimensional effect, which might also interest me.

• Should I add white gouache to the coloured bits to make them pastel toned? … maybe…

• Should I stop soliloquising and go and do those other urgent jobs?

The Cornish Soliloquy or How to Deface a vintage Mills & Boon

The hero… or is he a villain? of this vintage romance ‘Whispering Winds’, is the mysterious Mr Cornish. I sprang off from there to Cornish Rex cats, and 25 or so drawings later, here we are. With a Cornish Soliloquy. An artist’s book full of Cornish Rex drawings and paintings, tracing the internal conversation I had as I learned how to draw a new thing.

I don’t think I’ve ever met a Cornish Rex in person. I feel I know them a little now, and I’d certainly like to be introduced to one. Apparently they are wonderfully soft, and wonderfully curious. They have simply enormous ears, large eyes, a delicate build, a prominent roman nose and a crinkle cut hairstyle.

I won’t include all of the drawings here. Suffice to say it was an interesting journey. From fussy carefulness, through wild experimentation and daring (I should have been wearing my superhero mask for that bit) to lazy and half-hearted (before afternoon tea) and finally simple ink outlines, which are some of the ones that worked the best.

I’ve put them roughly in their order as they appear in the book. But this is not the order in which they were drawn. I wonder if you can work out which ones I did first and last. 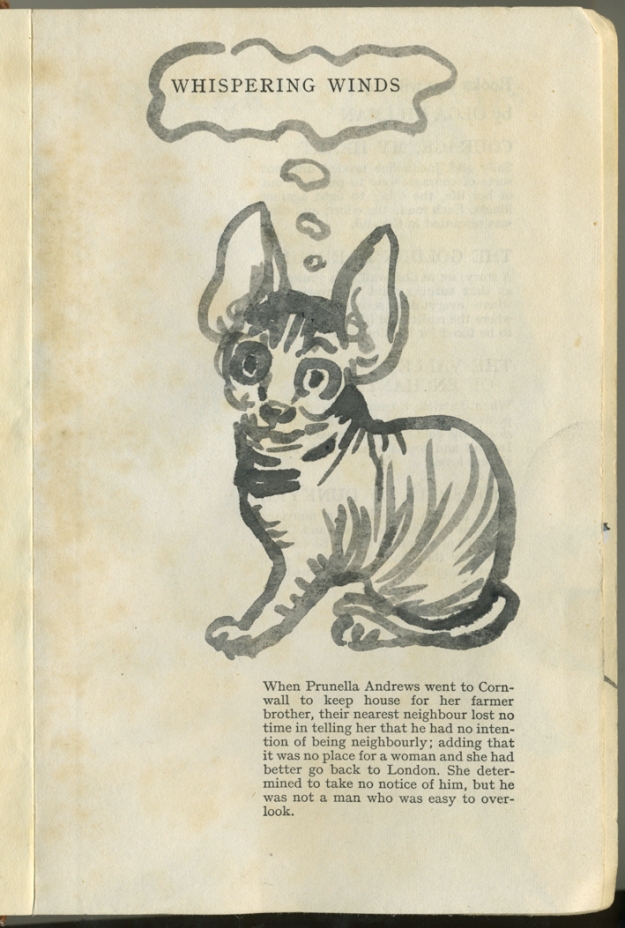 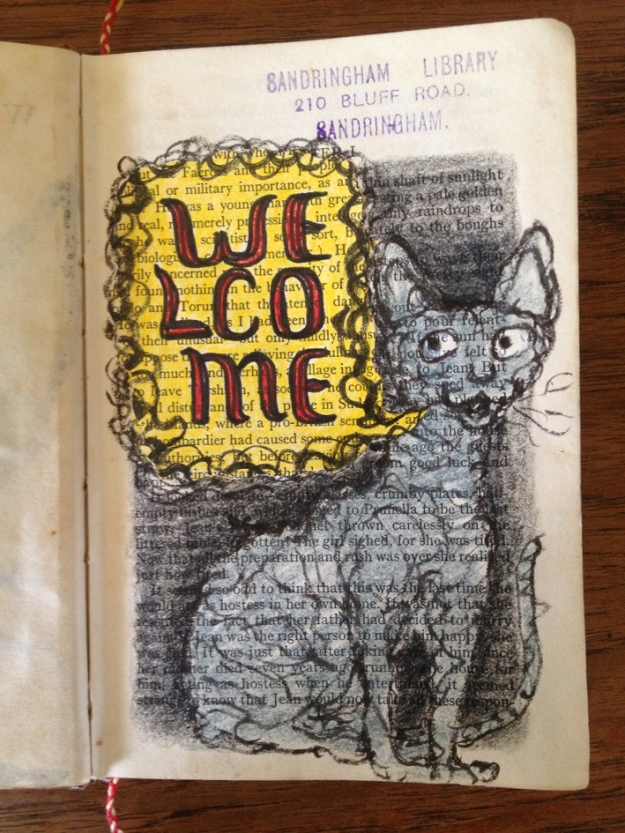 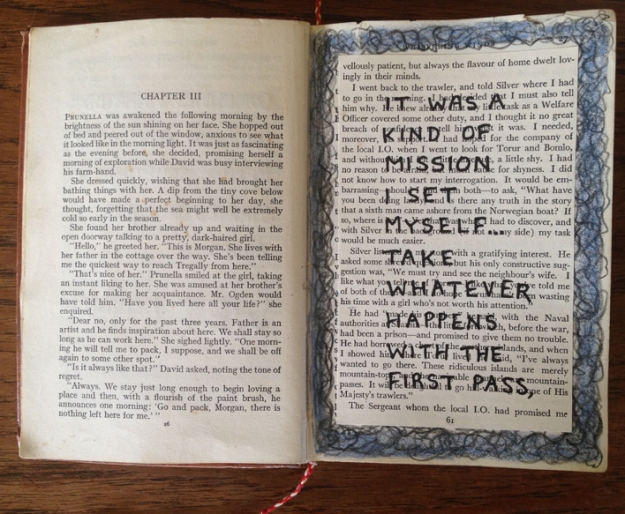 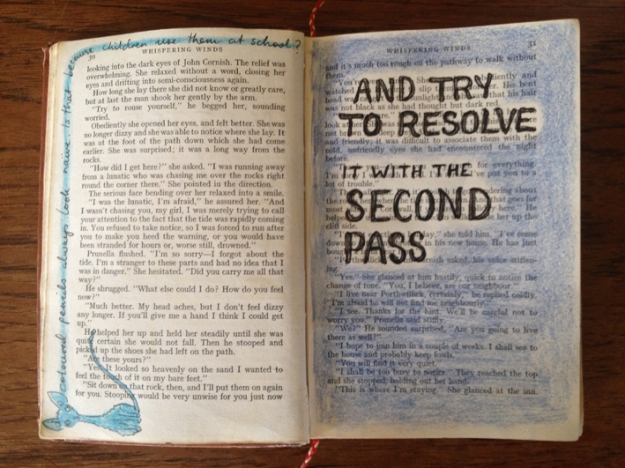 I made a hash of the drawing on this page and in the spirit of challenging myself to ‘save’ every spontaneous picture, I quickly followed Matisse’s example and ‘drew’ another cat with scissors. I was happy with the result, despite the fact that this fellow does not have the required roman nose. Other pictures were ‘saved’ less well.

This has the cornish character. 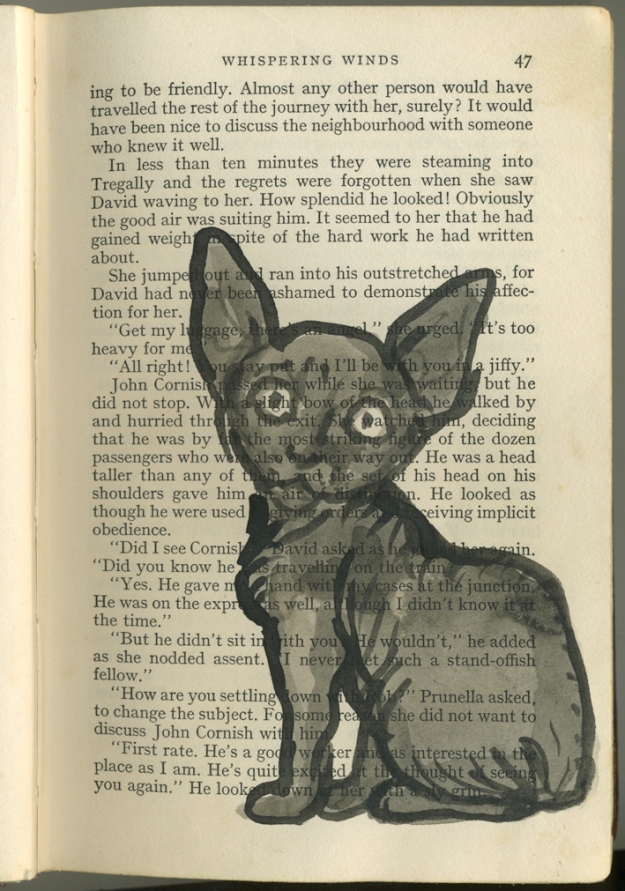 This is just blatantly cute! I mean really! There’s simply no excuse for this sort of thing. Ha ha! But seriously, why is it that this looks horribly cheap to me, and the two ink kittens at the front of the book seem to me good? Of course, all is subjective with art. But perhaps some of it is the soft pastel used here, which sometimes has an association with sentimentality. The ink looks vaguely oriental, and perhaps more sure-handed. It’s all conjecture. But these are things that get me pondering. And it’s a constant source of friction when drawing for children’s books. How to make the work feel like genuine art to me, and not fall into any of the several mine shafts that say ‘sentimental’, or ‘cute’ or ‘sugary’ (aaagh!) or ‘mediocre’ (that’s a very easy one to fall into, and let’s face it, by its very definition, most of us will fall into that category much of the time.)… the mine shafts go on forever.

This was the first one I did and is horribly overworked. In fact, just horrible, full stop. Truly cringe-worthy. Good thing I continued on and improved… he he 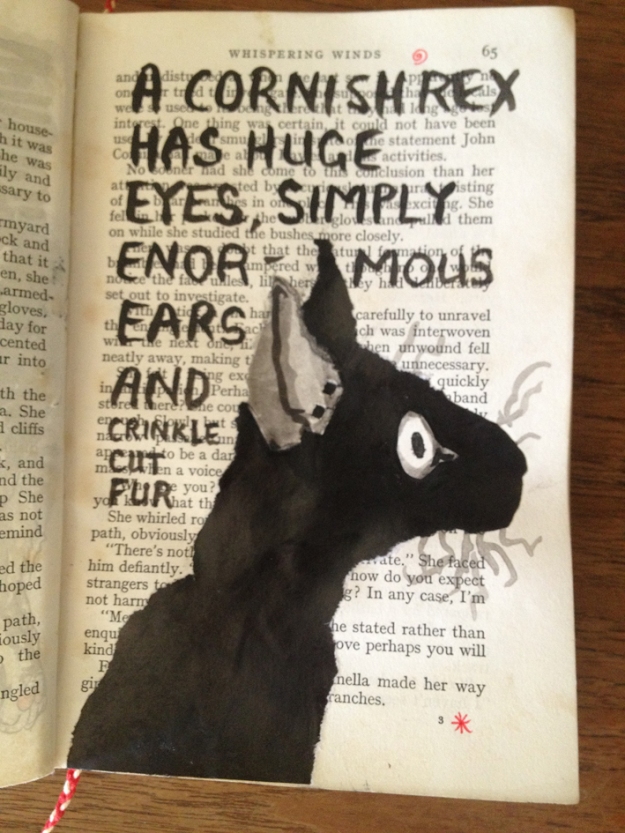 I could have improved this I think, with a different background treatment and a little more work with the swirling lines on the cat.

I quite like this one, despite the fact that he looks a little like a panther. At least he goes well with the ominous phrase picked out… ‘Mr Cornish is here, he wants to see you.’ Dum dum daaaaaa!

Corny cornish. Would have been less corny if I’d kept away from the colour highlights. She is ready for the chocolate box lid :-)

What the…? Mad, but I don’t mind it. It’s a bit quirky. And I enjoy the effect of the lines across the text. 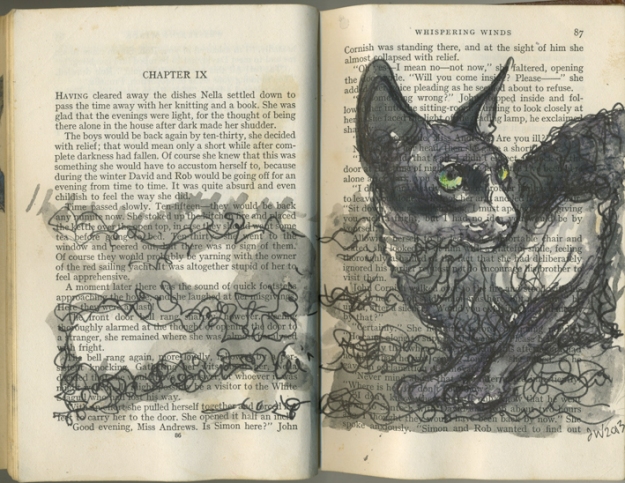 A mistake to colour the eye. Another corny cornish.

Very rough, but rather soft and expressive. I don’t mind this one.

This cat is lying down. I perhaps should have drawn a shadow. Then he wouldn’t look like a floating phantom. But it would have lost its graphic quality…I quite like him nevertheless. He’s a shape as well as a cat. These last two employ a chinese brush pen with a rubber tip. It’s quite nice to use, dries out quickly though, and the ink is so soluble that it’s rather ‘volatile’ when you add water later on. You can lose all your lines unless you work with care. 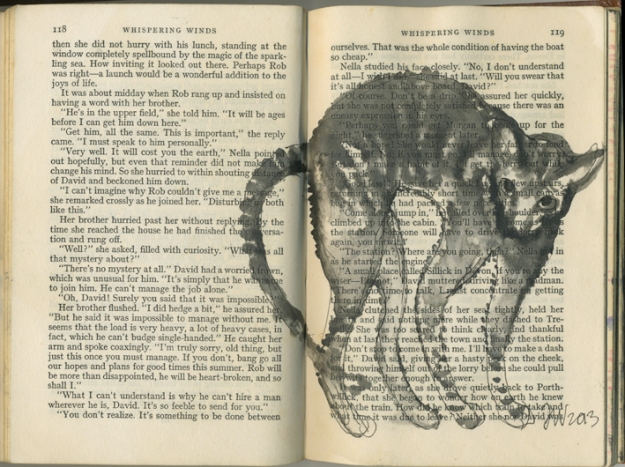 Here I used a fine liner pen, way too fine for the job, but it looked interesting once I added the ink with a brush.

The cat is more interesting than the drawing. Quite a personality by the looks of him. ” ‘You look wonderful,’ he said. It’s years since I had such a glorious pet’ .”

One of my faves. Jaunty little fellow.

I think this is shorthand. (This was before my afternoon tea. Did you guess?)

What do you get when you cross a sheep with a Siamese?

This is my favourite. I LOVE the library dates. They seem to go well with the drawing gestures. Don’t ask me why. (One day later: Ask me why! Ask me why! I’ve worked it out. It’s the repeating verticals and hook gestures… Of course I did that on purpose. Phew!)

There are many more drawings and writings in the book. Something on nearly every page. I kept coming back to it, as it became quite addictive.

This book is supposed to be on exhibition at the Courthouse Gallery in Camperdown, western Victoria from next week as part of the community exhibition ‘Animalia‘. I’ve missed the post, but I’ll try to get it there in time anyway.