It’s the second week of the school holidays and I’m back in the studio today after a busy week with the family. The boys are visiting with their grandparents in the country all this week. And I have no work to show you yet, so I thought I’d just say hi.

I really love the autumn in Victoria. The light is soft and warm with honey tones like a dessert wine. (yum.) It’s the best time of year for closing your eyes and lying in the sun,

for shaking apples from the apple tree,

or for having the Last Great Water Fight of the season.

But in the midst of this mellow finale, the wild birds have been rowdy today for some reason, as they were back in the spring when they were fighting for nesting sites and mates and eating each other’s babies!

This afternoon I saw a kookaburra nearly stun itself by attacking its reflection in our lounge room window, as a grey butcherbird watched closely, waiting for an opportunity. While the kookaburra sat on a branch recovering its composure, the butcherbird (3 flights up) dived down and audibly clouted it on the top of the head. Is that adding insult to injury, or injury to injury? The kookaburra raised its head feathers in lieu of a comb or a finger and looked outraged and rumpled but didn’t pursue.

Our chicken girls weren’t rowdy though. In fact, they were a little alarmed by the swooping and noises in the trees around them when I let them out this afternoon.

A chicken conference under the sheokes.

Takara demonstrates her funky chicken dance as three kookaburras overhead cause some concern with their noisy display. 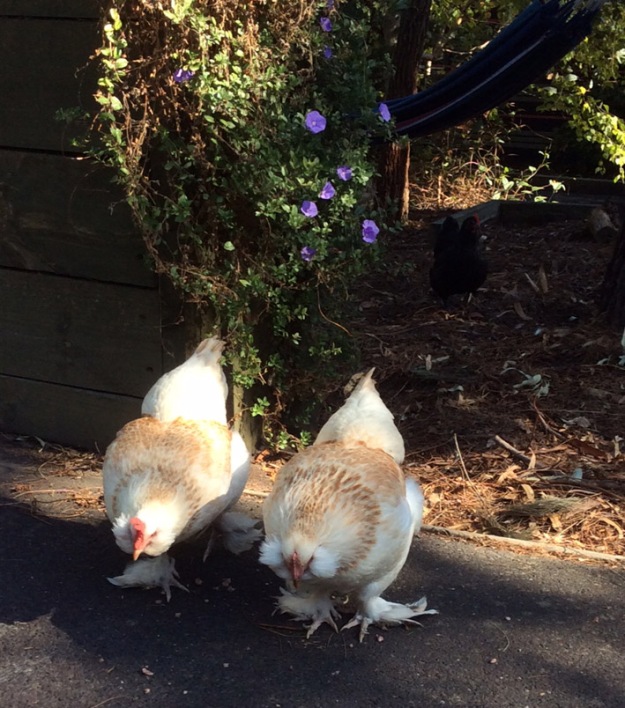 Our two Salmon Faverolles, Takara and Cressida Cowell eating peanuts in the driveway. Takara (on the left) has started laying and hence the big, red comb. Cressida is a late bloomer and a big, fat baby who galumphs about tripping over her ugg boots. She is by far our largest and heaviest chicken and at the bottom of the pecking order. It’s amusing to watch tiny Storm scold her whilst barely reaching up to Cressida’s fluffy chin at full stretch.

Meanwhile, back in the studio, for want of new artwork to show you today, here are some of the musicians that didn’t make it through the auditions recently.

They don’t mind. They have a regular gig down at The Swamp on Thursday nights.

Here are a pair of cockatoos do-si-doing. They are going to try to squeeze into a spread for Leonard Doesn’t Dance tomorrow. 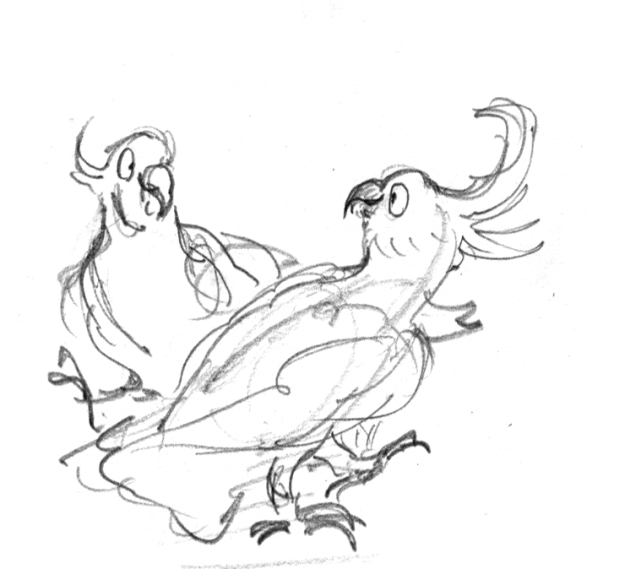 My drawing board now that the sun has gone down, 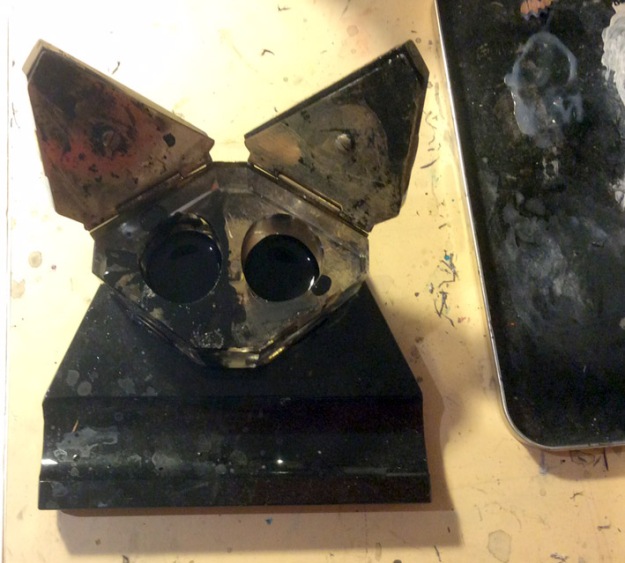 and last of all, something that isn’t here yet. The Squirrel. A wood fired stove that will soon be warming my studio. Woohoo!