I’m not sure where this paper doll process is going in an artistic context. It’s a bit like heading off for a walk with a lot on your mind, but no actual destination. Some of the thoughts that were in my mind at the time included: 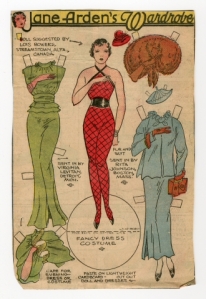 • Men have been dressing women for centuries, shaping them into an art-form irresistibly pleasing to their eyes. I can see why.

• Women have also participated. Some Chinese women broke their own daughter’s feet and bound them until well into the 20th century. (How did they feel about that?) Modern woman sometimes chooses to totter on high heels (me too), making herself both physically and psychologically vulnerable.

• People have participated in a similar art-form breeding dogs (and other animals) for a particular look. Sometimes when breeding didn’t perfect the look, they trimmed off bits of the animal.

• Men and women have done the same thing with flowers and fruit trees. Sometimes we have lost some of the original flavours or genetic material altogether.

This may all sound very sombre and didactic. But really I was just playing around on the drawing board for a few minutes, and the thoughts going through my head fed into what I was doing.

I took some inspiration from Swiss fashion of the early 19th century and sketched a woman (very loosely) and began to dress her. Piece by piece.

It’s definitely fun. And as with all my hare-brained wanderings, it’s very messy.

Did she look better before or after she was clothed in bulky layers? She certainly looked different after the clothes were added.

Don’t we change ourselves so much, with what we wear?

My lines have made her doll-like. I’m not sure that was deliberate. I was still in continuous line-drawing mode, so this was a big part of it. 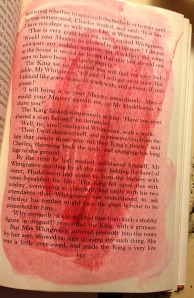 a bit of red for a skirt 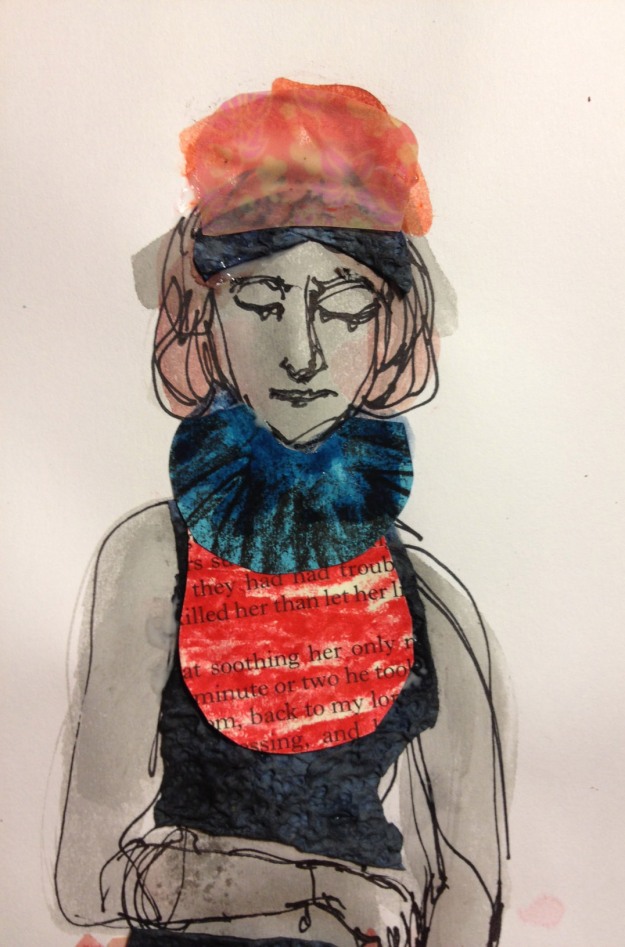 adding the ornamentation that begins to create the look, the shape of a particular time and place

piece by piece she is decked out 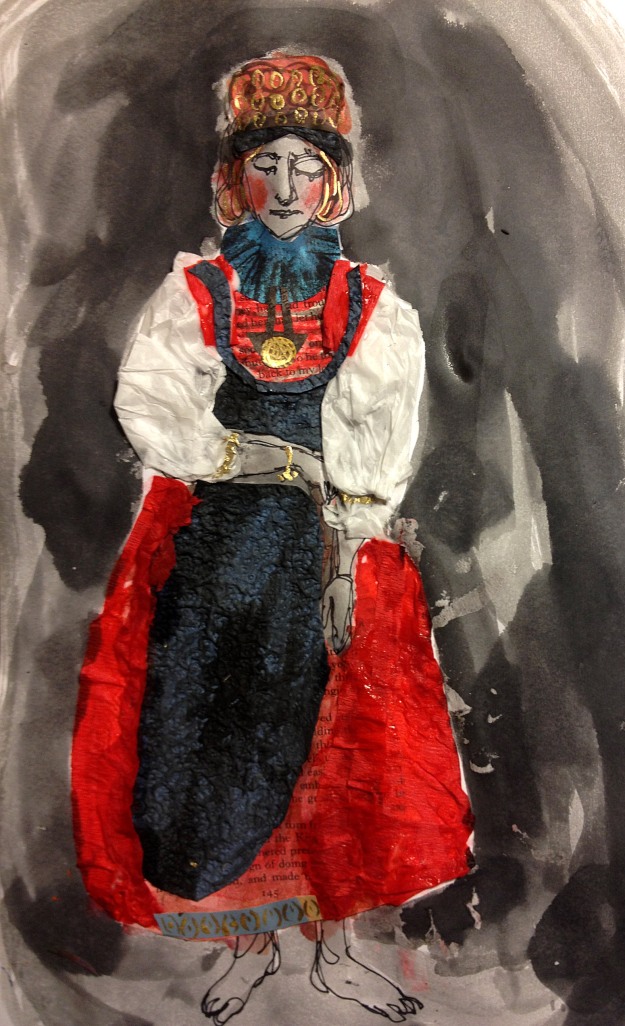 I haven’t done her shoes yet. I didn’t have any black paper. Perhaps this little bit of freedom I will leave her with. Feet on solid earth.

wet with glue, weighed down with drapery

Phew. That was fun. Now I’m going to have a shower and get into my soft stretch cotton pyjamas.

Here’s the same subject in a very different style. I couldn’t decide on the two skirt patterns you you can make up your own minds :-)

Bella will even be able to tell me what the fabrics are called. Is my girl a soft autumn Bella? I started off going for warm autumn and then my colour palette morphed…. (obsessively drawn to soft autumn it seems)

The fashion derives from circa 1840 and the applications of partial derivatives in differential and integral calculus. 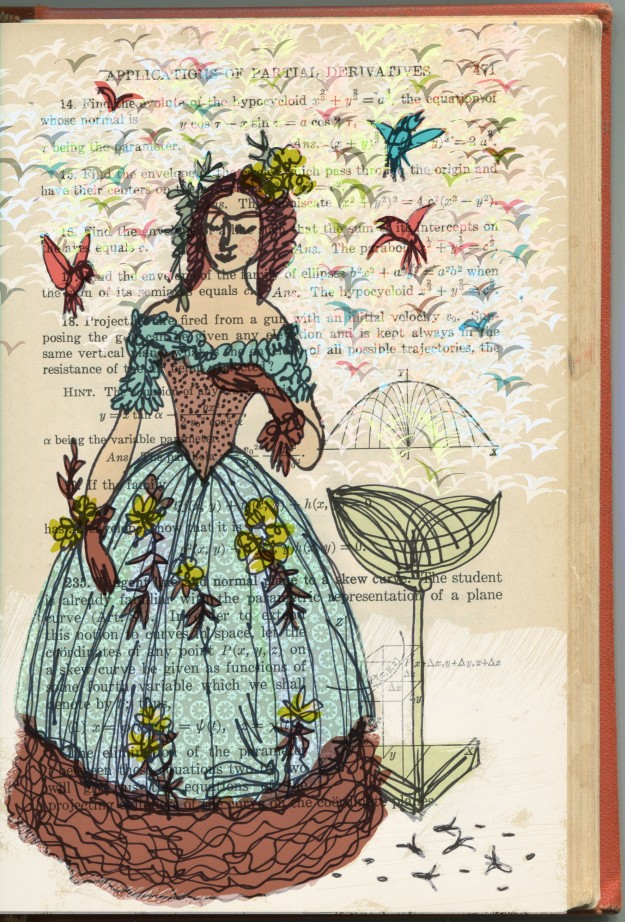 The lighter floral print skirt echoing the snowy overlays elsewhere in the scene.

The 52 Week Illustration Challenge theme this week is LINES. 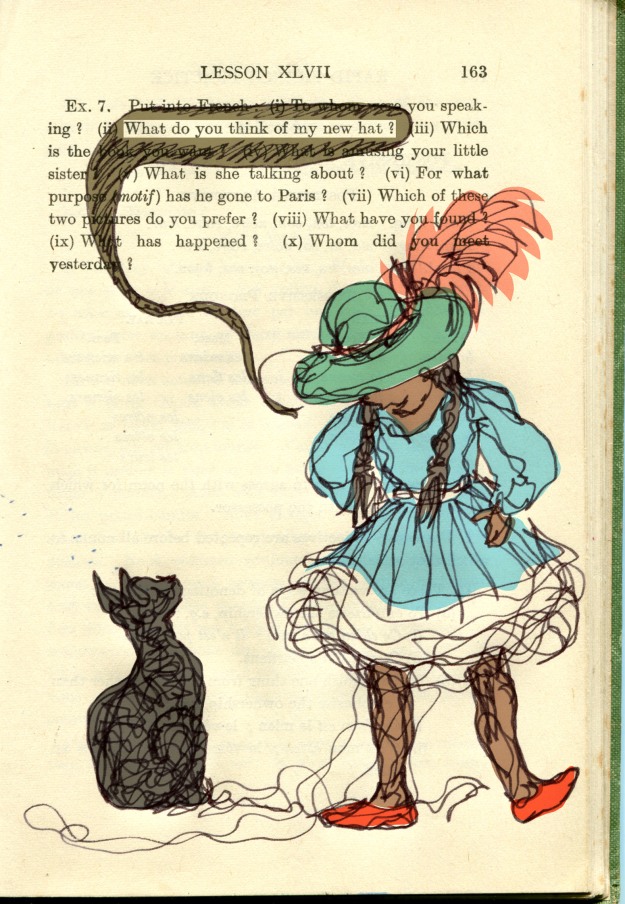 These are some line drawings done in the car during a rainy soccer training session in half darkness. I am quite pleased with them because they were done from the imagination and without any visual reference. I let the words of the french lesson lead the direction of the doodle. I tried to do them almost completely using a continuous line, except where my pen fell off the page. And above, I did some rather crude scribble in the speech balloon as well. 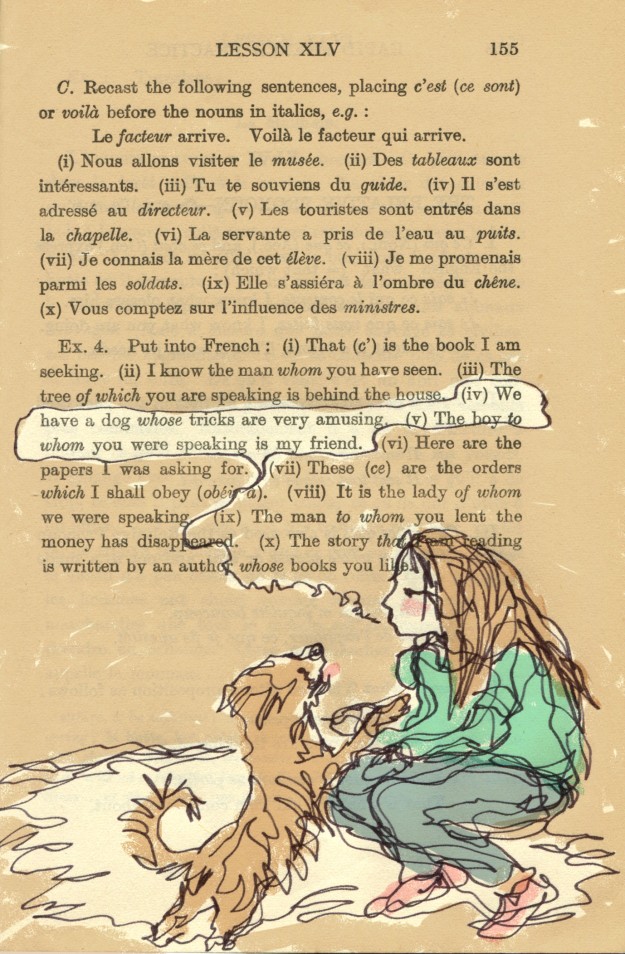 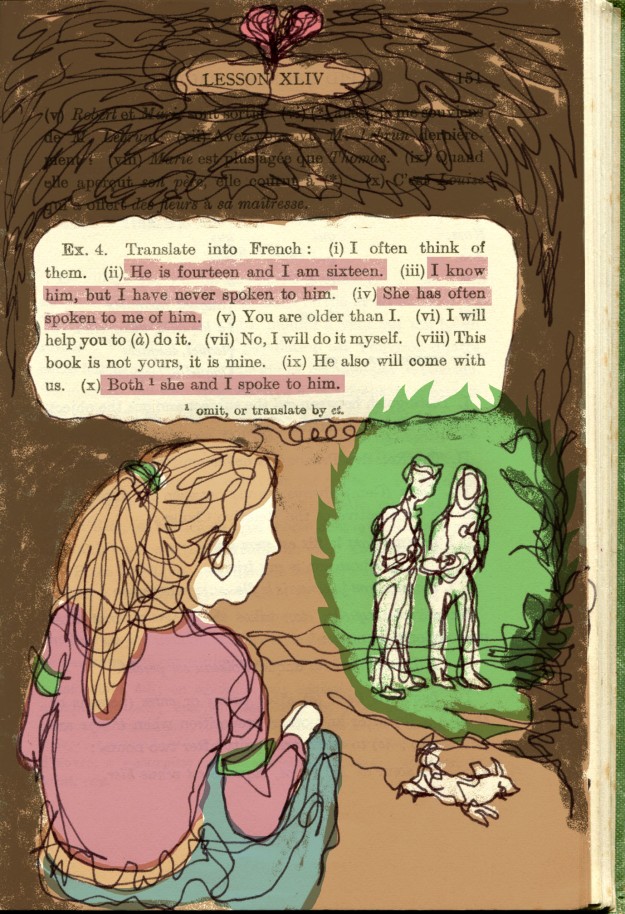 And below is one of my Calculus Fashion ladies with a bit of colour added. I am quite liking the effect on the parchment and print.

Sometimes I draw quite complex continuous line drawings in my mind, while lying in bed at night. It’s very relaxing, and the resulting drawings take up very little storage space.

Occasionally I forget where I put them, because I fall asleep :-)

These were all done using a historical fashion book for reference and a differential calculus book as a canvas.

I first looked for interesting mathematical lines and diagrams, then found fashions that seemed to meld with them. The rest was a bit of swift improvisation. The women in the fashion book are (deliberately) bland and faceless. I added some life to the people, and altered poses, and fashion to suit the squiggles of my pen.

I do seem to find this kind of squiggling very relaxing. And it can be quite suggestive of all sorts of things… Astrakhan, embroidery, hedges… 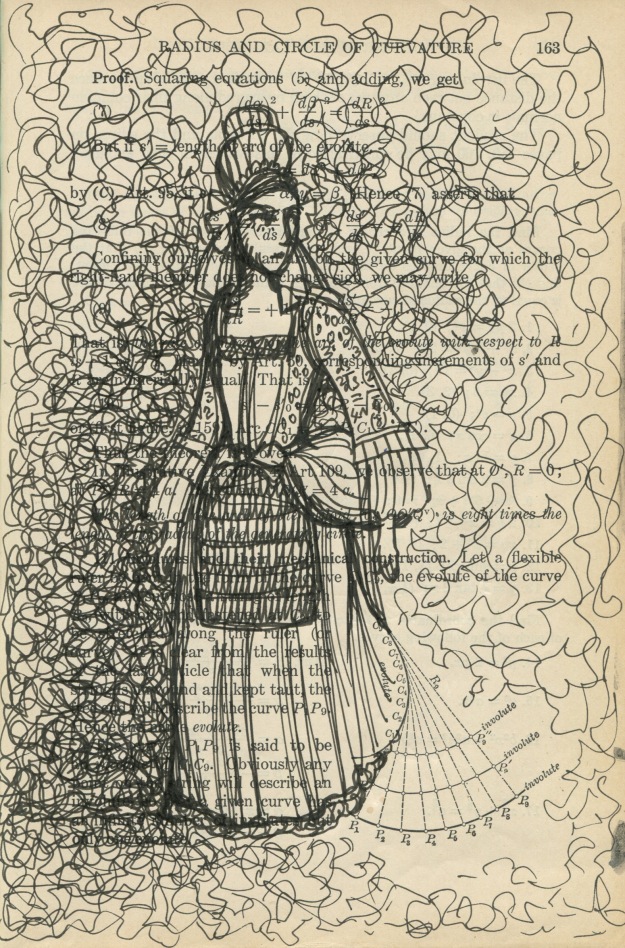 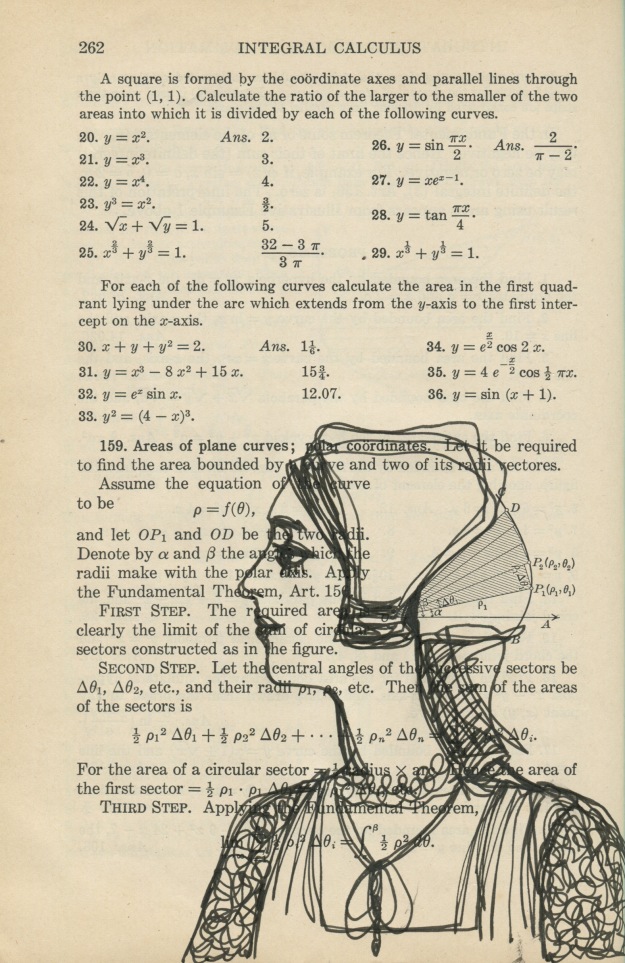