Here’s a wee snippet of my trip before I forget everything! 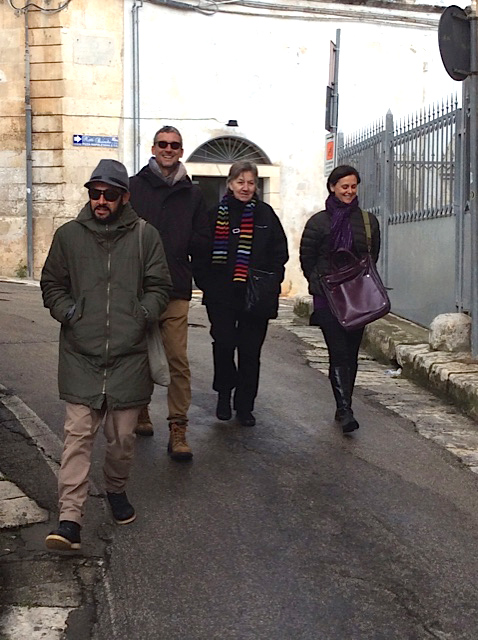 Unexpected sunshine in Bologna was followed by unexpected cold in southern Italy. Francesco, David, Ann and me.

Francesco – one of our gracious guides in Puglia. Guaranteed to be able to chat to anyone and get you in to see treasures.

One of the cities we visited in Puglia was the baroque city of Lecce, which features roman ruins and plenty of over-the-top baroque architecture, as well as some hidden artists’ studios, which you may be lucky enough to visit if you have a local tour guide to introduce you.

On our way in to Lecce, we noticed some colourful ceramic fish set to ‘fly’ above the doorway of a little studio on a corner. The door was closed and locked, the interior dim. But when we knocked and waited a few minutes, what treasures were revealed to us!

This cosy and crowded cavern is the studio of a Japanese ceramics artist Nagase Hiroko, who moved to Italy with her husband many years earlier. She speaks Italian, English, Japanese and is currently studying Chinese at night school. She is lively, loquacious and clearly has a love of knowledge and human interaction.

Hiroko wraps treasures for us

Crowded quarters as Ann Haddon and Ann James talk with Hiroko. David (right) takes up a lot of vertical space but not much horizontal space thankfully :-)

I wish I had taken more photos, but I was afraid both of being rude and of knocking things from shelves, laden as I was with backpack and bag. There were five of us visiting and the space was narrow.

Hiroko kept up a constant stream of delightful conversation, some in Italian (with Fran) and some in English for us. Here she is looking for a particular treasure to show us.

I bought several small items as souvenir gifts for friends, but the one thing I wanted to buy for myself was this bird (below) with a blue head and splashy pink back. I was by no means certain it could survive a trip home in a packed suitcase, but the choice was not mine to make. Hiroko would not part with it. She loved it and did not think she could replicate it, due to the the inconsistencies of the making, firing and glazing processes. She has never managed to get those particular shades of colour again, or make the beak just right. Each piece is fired four times, first to bake the clay and then to get different glazes to do different things. I really respect her for this refusal to sell. She said she has sold some of her favourite things in the past and has always regretted it.

The bird I wanted (rear). Too precious for the artist to part with. On the shelf below are little owls that hoot charmingly when you blow into them.

If you wish to see Hiroko’s studio while visiting southern Italy, or to contact her, here are her details.

Later I’ll post photos of the papier mâché artist’s studio that we visited on the way out! 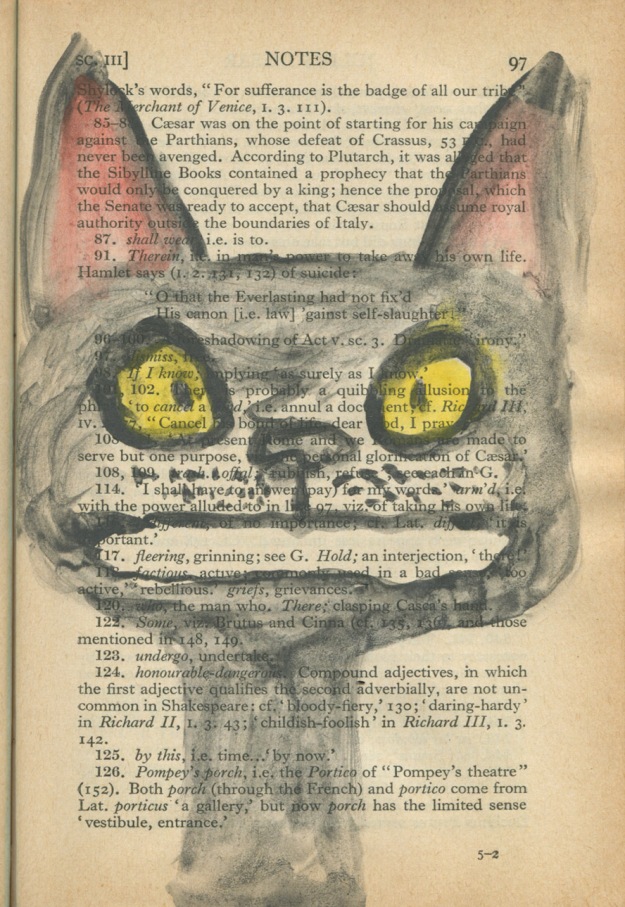 Fleering … Shakespearian for grinning. Who would have thought? Do you know that you can paint in the bath using your ArtGraf water-soluble graphite block in its handy tin and a brush. Just add bathwater.

My apologies for my long absence from posting. I have been flying, not fleering.

The Bologna Children’s Book Fair was an eye-opening and fabulous experience. More on that later. 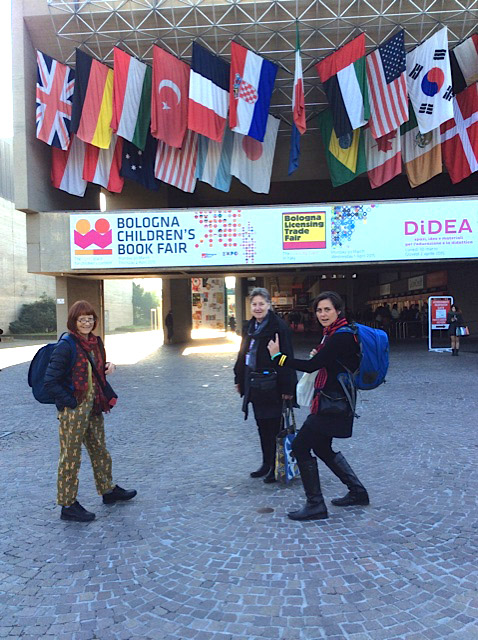 Puglia was beautiful, and the trulli were as lovely as I could wish them to be. More on that later too. 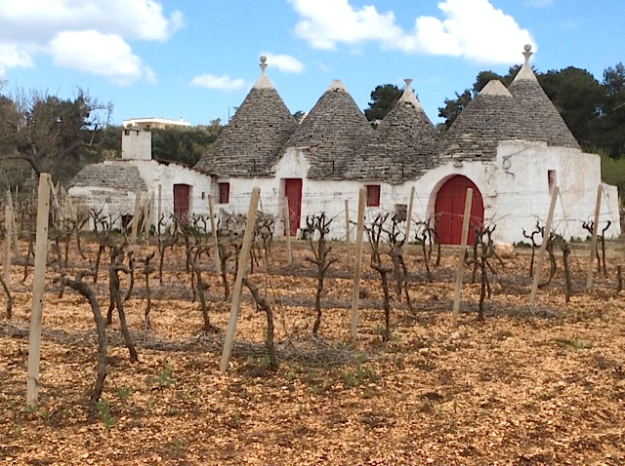 trullo with red doors and grapevines

While I was flying to Italy, my husband Scott bought a house for us at auction and when I returned home two weeks later, I was thrown into a whirlwind of preparation for the sale of our current house. Whirlwind notwithstanding and with our auction two weeks away, it’s back to work today. And this is a marker post!

Tomorrow I’m lucky enough to have a spot in the Faber Writing Academy Picture Book Masterclass. I’ll be taking Trudy and Dodds, roughly formed as they are, to have a little work out.

To recap on Trudy and Dodds, this is a picture book project that I received a grant to develop back in mid 2012. The grant was part of a new Children’s Picture Book Illustrators’ Initiative managed by the ASA and funded by the Literature Board of the Australia Council for the Arts.

One of the images I included with my grant submission. A little pen and ink sketch with digital colour. (Trudy in a purple shirt. Dodds on the billy cart.)

I drew dogs as the characters at that time because I have been drawing dogs (with and without clothes) for as long as I can remember. Has anyone else read The Lives of the Monster Dogs? But all along I really thought, I’d rather they were doggish than dogs: doggish, because dogs are part of human history, and if we aren’t mortally afraid of them, most of us love them. But not exactly dogs, because… just because. They are human really.

Unfortunately for Trudy and Dodds, the grant came just after I had accepted the manuscript for Thunderstorm Dancing and they got caught up in a delay of nearly three years! (Thank you to Lucie Stevens at the ASA for her patience in extending my timelines several times.)

But NOW, it’s time to move forward. And I’m excited about the masterclass tomorrow, and a little nervous. Not nervous about writing, because I love writing. But nervous about sharing my writing aloud for the first time since I left school back in the ’80s. Ahem!

So this week I…

• Had lots of ideas about the medium, style and setting.

And got lots of inspiration for the architecture and setting from looking at Puglia and the trulli there. (See my earlier post on those here.) The architecture and setting are very important to me for this story, and were a big part of the original concept that I submitted to the Australia Council way back at the start of 2012. At that time, my inspiration was Mexico. But now! I’m going to be researching and recording the setting while I visit my friend David Capon in Puglia during April. I am so looking forward to it.

Trulli in a rough scene to open Trudy and Dodds

• FINALLY finished the first draft of the manuscript. (Hooray!)

I was having a lot of trouble getting the last quarter to work, even though I knew what was to happen at the end. What I didn’t want was a story that leaps into action and then sort of… peters out…. blaah. Yeah well… so then… hmmm…

• Started a DUMMY book for it.

I had my usual problems with this. I have trouble drawing the loose, loose, rough things to begin with that show the shapes on the page. I need somebody to stand over me tapping their foot when I am doing this, and looking at their watch. That actually works. If I don’t have a timekeeper I get all distracted with details in the pictures. And then… well then you need to change something because THAT isn’t going to happen on THIS page anymore. And then you go… errm… why did I draw that in so much detail? Doh!

For a glimpse at how it’s supposed to be done, go here!

And then bounced off those to make drawings for Dodds.

Dodds Take 2 – skeleton and sinew (of sorts). Is this a karate pose? 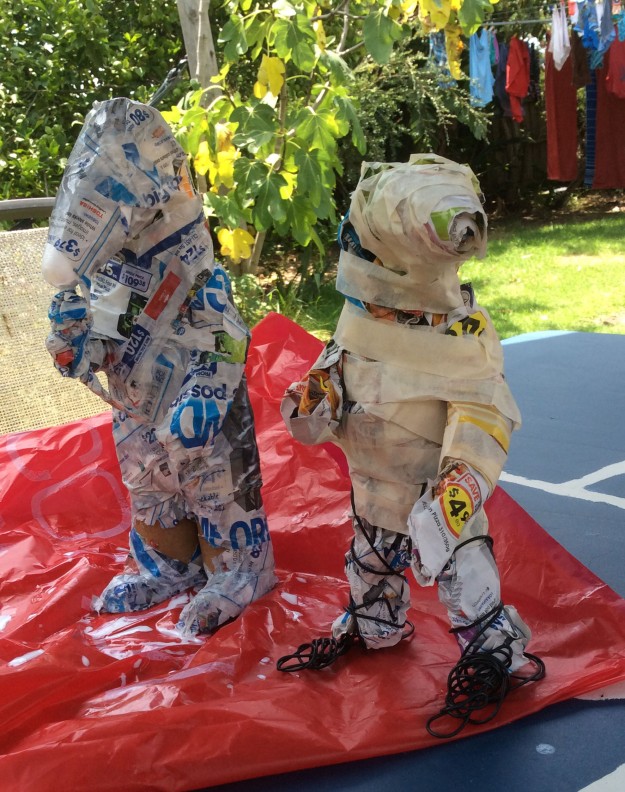 Dodds found his smile when the paper jaw went on. 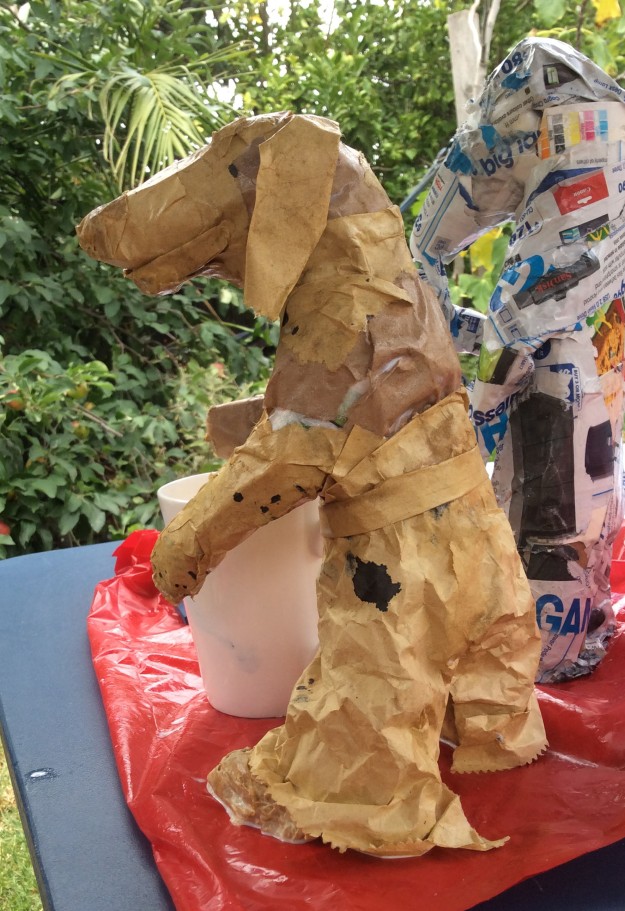 An initial sketch of the model. Finding my way 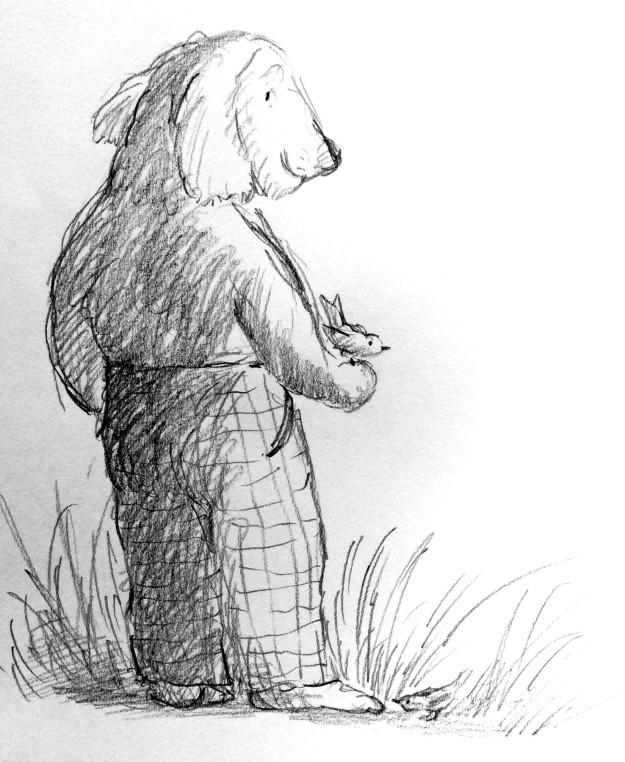 Dodds sketch with the nose, jaw and gentle expression starting to settle into place. He’s a gentle giant. I looked at Wrestlers from the 1940s for inspiration.

Tell you later, how we get on at class.

Oh boy! My air ticket is about to be booked for this!

I can’t quite believe it. I’m letting myself be swept along and away.

Thunderstorm Dancing will be going on a holiday to meet lots of people at the fair, and one of the spreads from the book will be featured in the Hello From Australia exhibition, organised by Books Illustrated.

I’ll be helping set up the stand with Ann James and Ann Haddon and generally loitering about with my eyes out on stalks. And I’ll have a stint or two doing drawing demonstrations, which should be fun. The only shame is that the fair is for book industry folk and is not open to the public so I won’t have any children coming to visit. I love the conversations that happen with children when I am drawing for them.

There will be several other Australian children’s authors and illustrators there too (and the numbers are rising). And intriguing lectures. Some of last year’s ones were called things like:

Not for girls, neither for boys: free novels to grow up freely

The universal language of fairy tales

Illustration beyond the page (What happens when illustration leaves the book and expands to new worlds. From children’s plays on dogs and hyenas, to body painting the Book of Ester.)

The Future of Education is already here: Literature for Children and Young People in the Cloud

Writing for children, a different outlook on the world

Show us your illustration!

And many, many more. So I am looking forward to some great conversations and much inspiration.

I’ll also get time to pop down and visit my friend David Capon in Puglia, Southern Italy, here. Wow! How beautiful is Casa della Scrittrice? 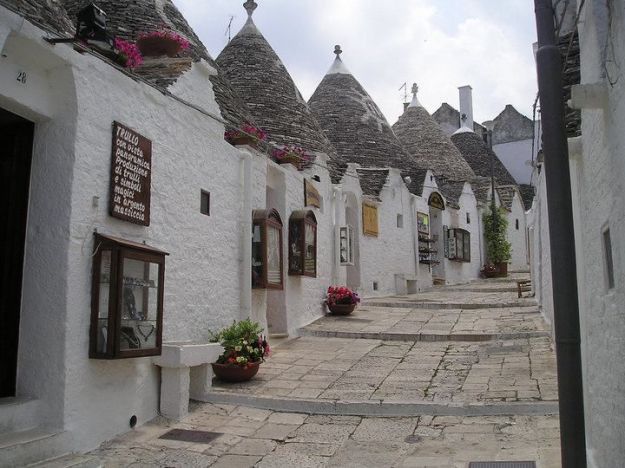 This is Puglia. Those trulli remind me of a scene I absolutely loved in The Horse and his Boy by C S Lewis. Does anyone remember the scene where Shasta is outside the walls of the city of Tashbaan, alone amongst the tombs and the sun goes down? A cat comes and keeps him company. (The cat is Aslan in disguise of course.) I just LOVE a magical cat.

One of the beautiful illustrations by Pauline Baynes

Actually they also remind me of another favourite book, Tomi Ungerer’s The Three Robbers. 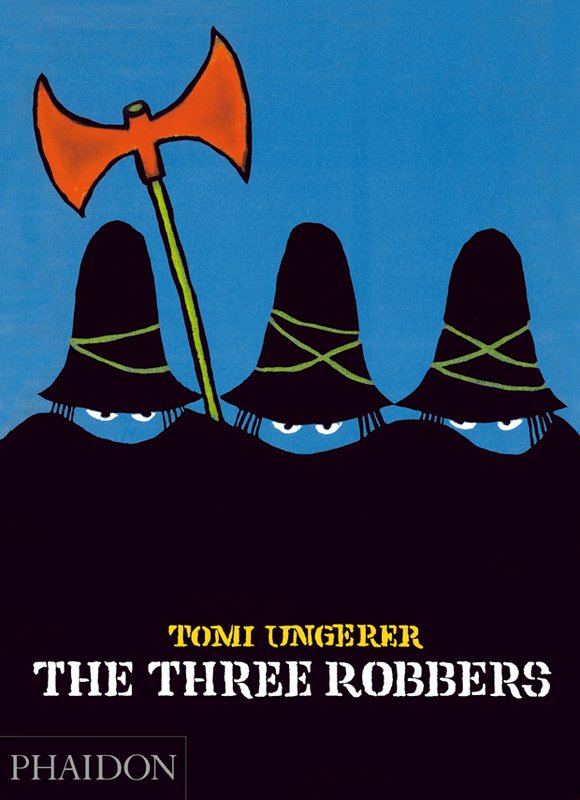 At the end of the book, the three robbers build an orphanage with domes the same shape as their hats.