This is the second page of blobs that I worked on in the train last Friday. In this case, I was deliberately turning them all into dogs. I think that if I draw enough blob dogs, one of them will begin to emerge as a repeating character who could star in his own world. The nature of blobs is that none do exactly repeat themselves… they are new and special in their own blobby way, but there are recognisable types and that is enough for my purposes.

Only about half of the blobs on this page were in a state worth posting. Two were accidentally sacrificed on the McCrae Beach on Saturday as I tried to colour them with borrowed art materials and sea water. The results were worse than you are imagining now.

As far as repeating types go, one thing is apparent already. I have a fondness for whiskers.

This is Angelina the Bearded Lady. (Miniature Schnauzer) She has been looking for circus work for a while, but so far has only been offered work as a rat catcher.

This is Hamish. (Border Terrier x Dandie Dinmont Terrier) Hamish is going to let the chickens out on a blustery spring morning. He never chases them, because he knows they don’t like it. HIs favourite hen is a Light Sussex named Leonora Carrington.

This is Toby. (mostly Foxhound but his great grandmother was a Poodle) He’s a country dog. He left the foxhound pack when the others made fun of his moustache. Now he wanders the hedgerows and picks up a bit of work here and there. He is courteous to passing foxes, and they are sometimes courteous to him.

This is Theo. (Wire-haired Fox Terrier) Theo is in a hurry to pull on his coat as he has to pick up the kids from puppy school. There are 14 in the litter so he is taking a truck.

This is Gabriel. (Soft-coated Wheaten Terrier x English Pointer) Gabriel runs a delicatessen, and is renowned locally for his skill with making tarts. Once a fortnight he goes fishing and takes a picnic lunch with him which is made by his partner Phil. He enjoys taking a little time off cooking on those days. But if he catches a fish, he returns home with renewed vigour and invents a new fish dish every time. All of them are simply delicious. 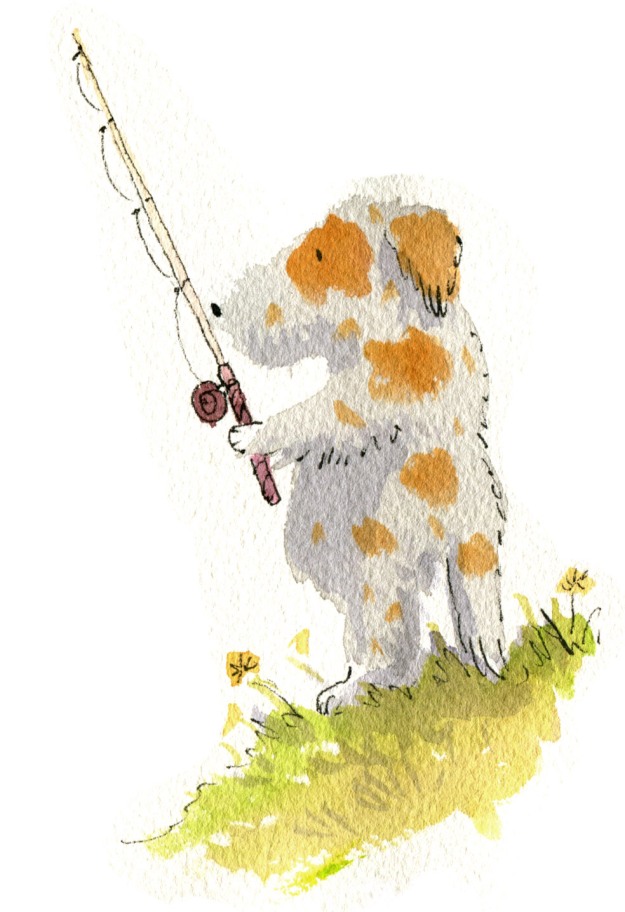 This is Phil. (Irish Water Spaniel) Phil lives with Gabriel and is an indifferent cook as he gets very little practice. However he is a keen gardener and drives a lorry during the week. He’s also a bird fancier, but sometimes when he is watching birds too closely he has an irresistible urge to yap, which he finds mortifying. 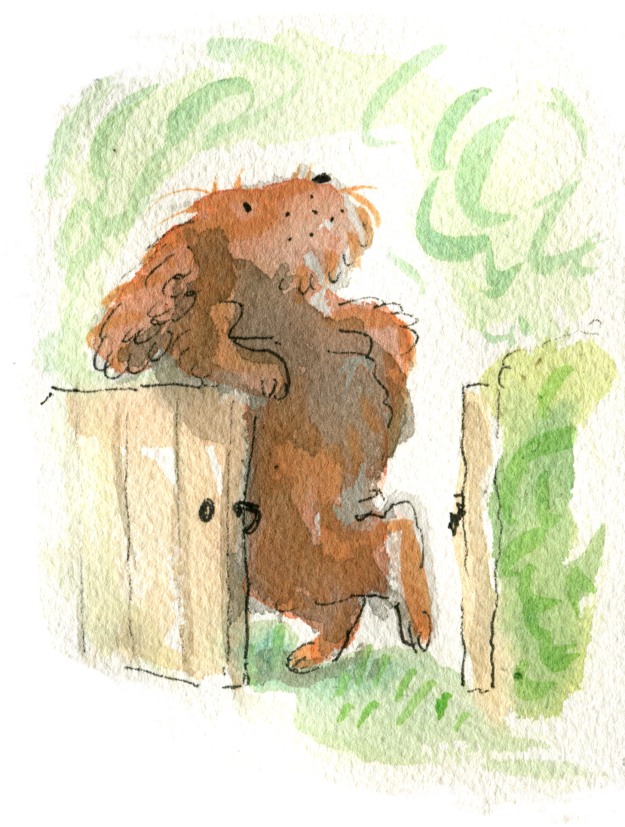 This is Madison. (Cavalier King Charles Spaniel x Cardigan Welsh Corgi) Madison lost her tail in an accident when she was only 3 months old, but she is wagging on the inside.

This is Adrian (Scottish Terrier) Adrian loves listening to Jazz FM on his new radio and has been known to bite the vet. 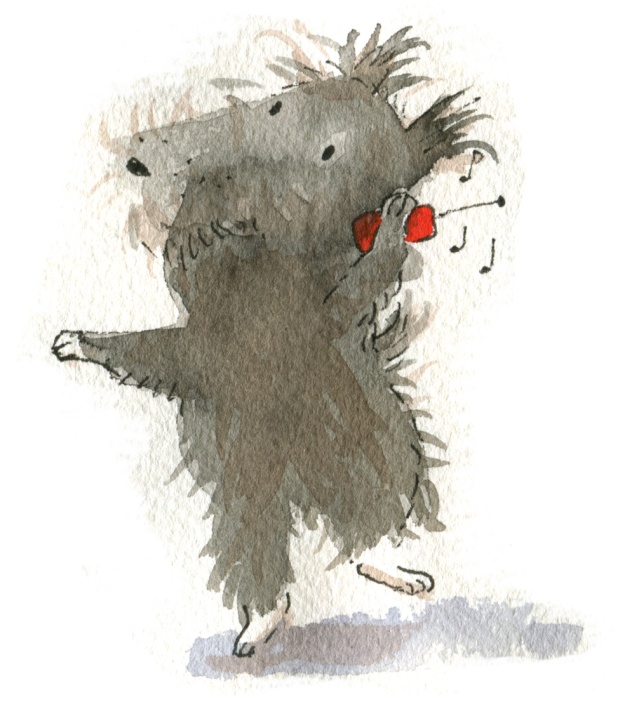 This is Jean-Paul. (Irish Wolfhound x Cairn Terrier. His parents separated due to irreconcilable differences.)  You needn’t be alarmed for Jean-Paul because he is demonstrating for 25 young pups at puppy swim school, and is not really in any danger as long as he stays in the water.

This is one of the puppies at Swim School. I can’t remember his name. He has just smelled a fart and is checking to see if it is his. 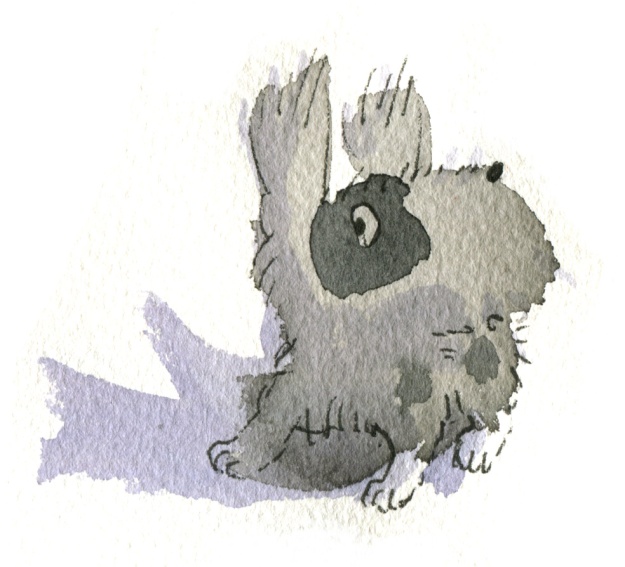 Here are some final blob doodles to mark the end of the school holidays and back to work tomorrow (not to mention the piles of washing). I painted some more spiky blobs this time thinking that they might do well for some more birds, just for fun. The curvy spikes have served well in most cases as wings and beaks.

The colours did not work very beautifully on this one. But here is a little Carnivore Bird Thing finding his legs… or his dinner.

This is another Little Carnivore. I like his colours much better. 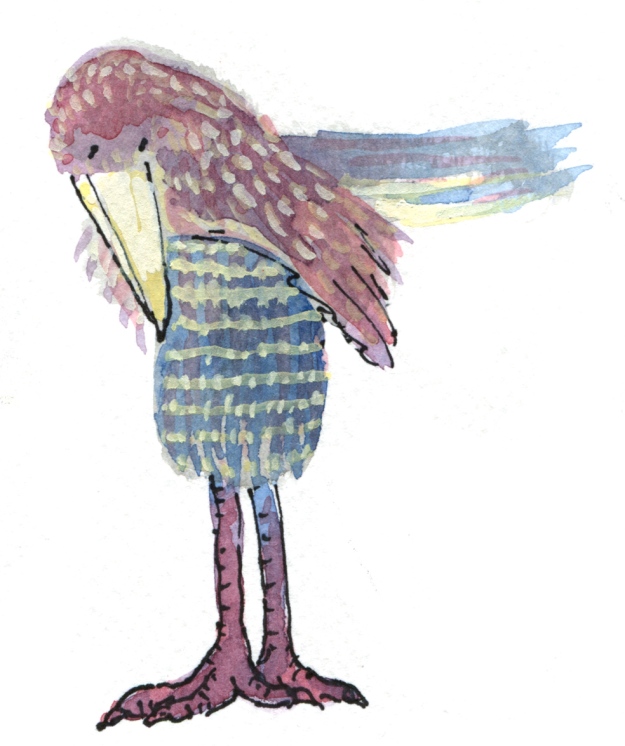 With all those babies, it’s only fitting to have a Mumsy kind of bird. This is a Mummy Trouserbird. She is waiting for her babies to catch up, but they are not very quick on their feet. 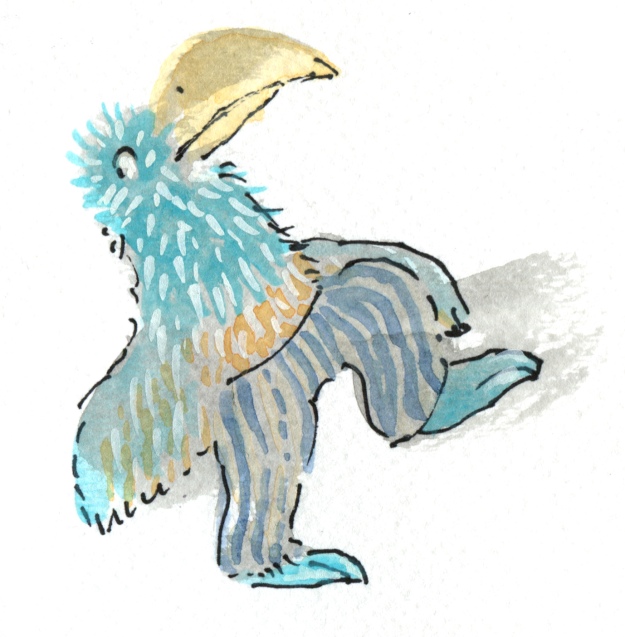 This is a Daddy Pyjamabird. He’s getting up for a midnight snack. (note: At night a Trouserbird is called Pyjamabird.)

This is a Trouserbird wearing a parachute. 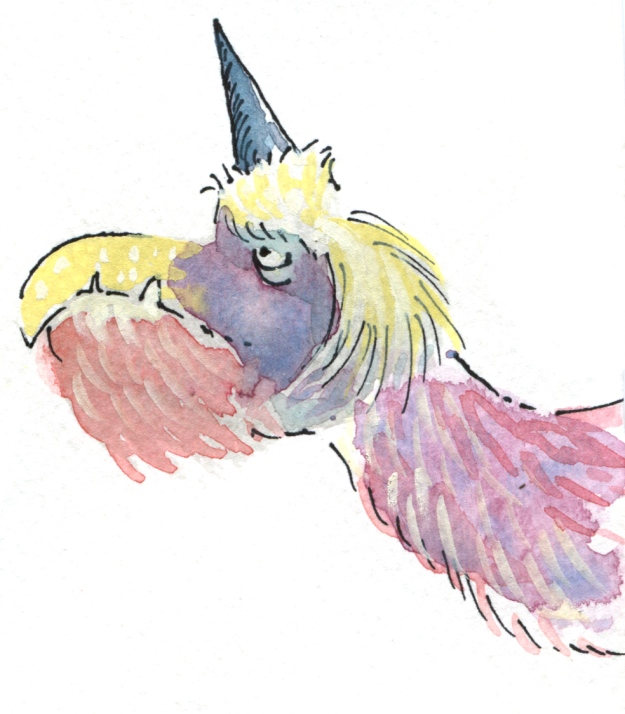 This is a Preposterous Thing. what can I say? He is lucky to be anything, considering that not long ago, he was merely a blob.

This is a walrussy thing. He may be depressed due to the fact that his tusk is coming out of the wrong place and causes him discomfort.

Here are the ‘second pass’ blob creatures. There are also a couple that didn’t make the grade with the first pass and are now so much improved that they are going up after the second pass.

Little Elephant is messier but richer for his second layer of colour, I think.

I like Little Bird much better for his red head and little tail feathers.

Stork looks much better now to me. He’s having a ball at the beach. 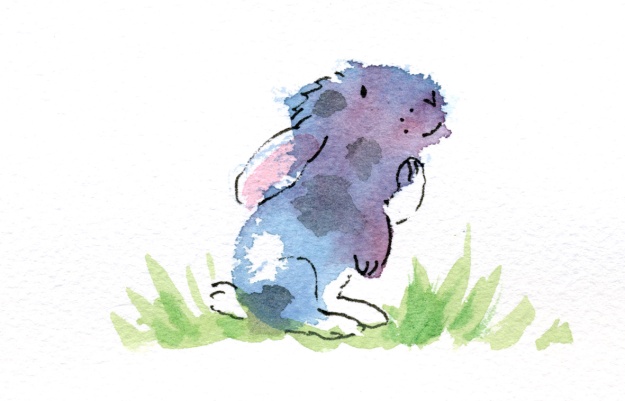 Thoughtful bunny was not a success to my mind. The patches were a mistake, but you never know until to try. 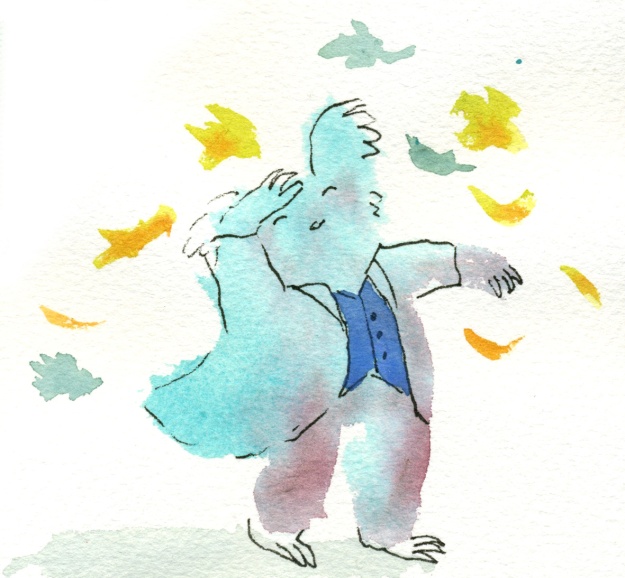 I like this guy now he has some autumn leaves bothering him. Lots of movement now. I could have painted his coat actually…

This funny little beckoning dog didn’t go up first time. He’s better with a bit of shadow. (Do you recognise the cloud over Stork and the autumn leaf here? They are all close neighbours on the same page)

Finally, a parrot who didn’t make the first cut. I like his feathering now that he has a bit more colour. Ticking in feathers or fur really does something for me. I love it.

And here, to finish up, a whole page of weird new blobs. We shall see what happens when I add a touch of colour to some of them. It’s a different effect of course, over grey; the colours are subtler, less pure. But this is what I did with the bookmarks originally.

And now it’s back to my Thunder work for the day.

Naturally, after playing with the grey blobs on the weekend, I was tempted to whip up some colour ones late last night to squeeze some in for the 52 Week Illustration Challenge – week’s theme ‘Colour’ before the new theme today. (Themes change each Wednesday.)

It really was late at night. So these were ‘one pass’ illos. I nearly didn’t bother scanning them because I wanted to go to bed, but the photos were too awful. Here they are in their scanned, and unedited state. 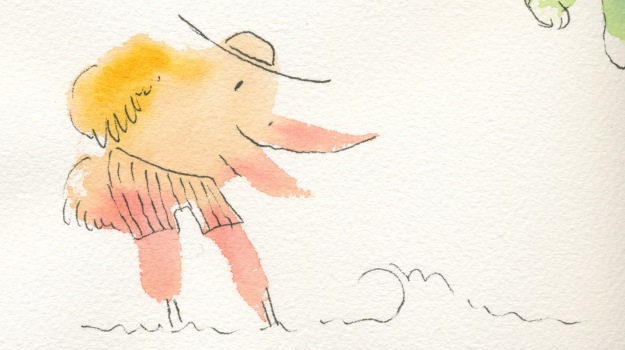 Stork on holidays at the beach.

A sentimental dinosaur. I actually thought this was a bit too corny. Don’t know what came over me. Maybe Facebook-Peer-Pressure!

A thoughtful baby rabbit. I love the way the fuzzy edges and curves of the blobs can just summon a character into my head… if a character doesn’t appear fully formed in my mind’s eye beforehand, it generally doesn’t turn out well on the page. Of course the fuzzy edges on this coarse watercolour paper are quite suggestive of animals because they look a little hairy. But let’s admit it… there’s a bias there anyway!!

Today, I spent half an hour doing a second pass with more colour to enrich them… and to experiment of course. Some were improved and some were ruined by the second pass. I’ll see if I can find time to scan these and post them tomorrow or the next day.

Last weekend was the Warrnambool Books Children’s Book Festival in celebration of the bookshop’s 30th anniversary. I was a guest illustrator on Friday and did a school visit at St Joseph’s Primary School before a book signing at the family owned bookshop.

While I was there, I decided to mix up two ideas from other clever illustrators. I have seen Jude Rossell giving out bookmarks with small illustrations on them at illustrator events. And Alexis Deacon has described his fun practice of painting or drawing blobs and then turning them into something here and here and most awesomely here.

I was just after something simple and quick to do in between signing books, so mine were pretty basic but the kids loved them. Here are some of the bookmarks I did the next day at home, simply because they were so much fun. In fact it was rather hard to stop! 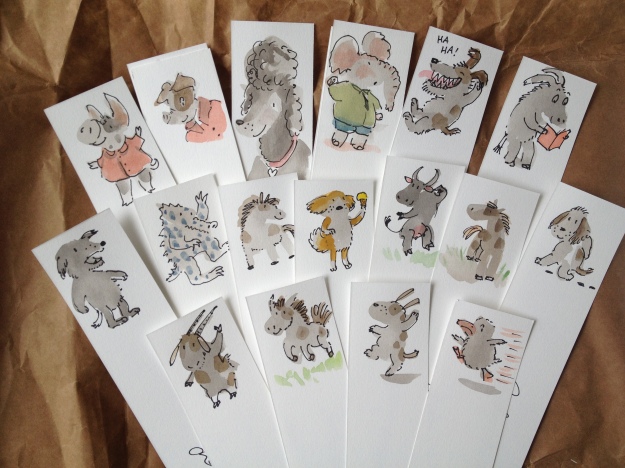 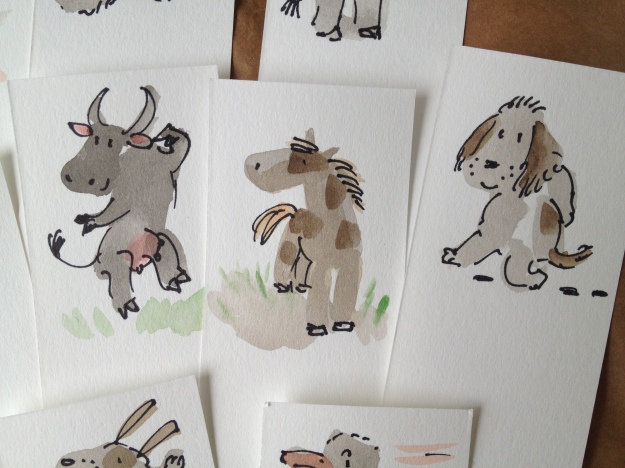 They take about one minute each.

• First paint a pale grey-brown blob with some interesting projections and bumps.

• Then paint a few more while the first one dries.

• Go back to the dry blob and add a few lines with a felt tip pen to turn it into whatever springs to mind.

• Finally, add a touch of colour if you want to. (I didn’t do this to many of them in the bookshop. They were very simple.)

My two boys joined in with great enthusiasm and did some fabulous ones. It is a good activity to do with kids, and taps into their wonderful imaginations. In the case of my two boys, it was fun to see how they formed an alliance whereby Arthur would paint the blobs, and then after they dried, would ask Hugo what the blob should be. Hugo, with barely a split second’s hesitation would say: ‘That’s a pig blowing a trumpet. That’s a fish with legs. That’s a cow shouting.’ And so on. Arthur happily drew them after that.

Like me, they found it hard to stop once started :-)